Challenge
A newly-installed 24″ cement mortar drinking water pipe with mechanically restrained joints leaked when pressure-tested. Although the pipeline was installed according to the manufacturer’s instructions, the cause of the leaks was unclear. The contractor was faced with the possibility of having to replace the entire length of brand-new leaking piping.

Engineered Solution
The HydraTite® internal pipe seal is an ideal solution for leaking joints in pressurized pipe and for preventing infiltration and inflow in gravity pipe applications. It is predominately used to repair aging piping and civil infrastructure. This application was a new opportunity for HydraTite® to reduce additional project cost and limit potential schedule overruns.

Scope
The 24″ diameter pipe presented limited access and restricted clearances. The pipe was supported off a bridge, so access had to be coordinated with the pipe installation contractor. Cold weather hindered work because ice formed inside the pipe at the repair locations.

Solution
The mortar was removed prior to installing HydraTite®. Nine joints were then repaired, at times separated by over 200 feet. Sections of pipe were removed to provide access from suspended scaffolding. The pipe was then reassembled, and the pressure test was successful. HydraTite® stopped the leaks for less than 5% of what it would have cost to replace the piping. 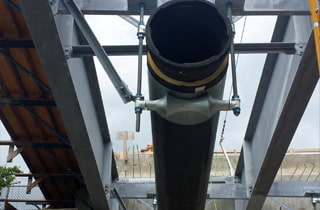 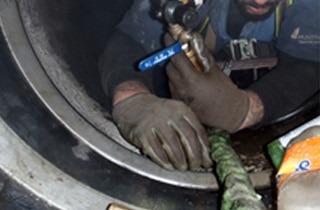